Have been using Microstrategy 9 for a while, had a moving sum problem recently. The customer basically needs moving sum for the past 12 months for each state/branch. Of course the month is based on accounting period, i.e. 1 May to 30th Apr each year. Below is the structure: 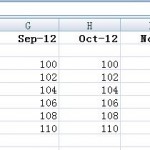 The moving sum metric was movingSum<SortBy= (Month) >(revenue,12). When this metric was put on the report, it turned out the moving sum is always a cumulative sum of revenue of each branches first than by month, i.e. for branch bbb, it was 202 instead of 102 and  for branch aaa June 2012, it was 730 instead of 200.

Searched a lot on Google, thought about options like metric level(dimensionality), sort order, etc but none of them fixed the problem. At last after reviewing the SQL generated by Microstrategy, the correct formula should be movingSum<BreakBy{state,branch} SortBy= (state,branch,Month) >(revenue,12) which means for new state/branch, it starts from beginning, within each row, gets the moving sum.

Lessons learnt: Microstrategy trying to be user friendly by hiding technical (SQL) details, at price of using a lot of terms(such as target, group, filter, level) to build the system. In the case of this example, it’s far less obvious and far more complex than the original SQL solution!

Tagged on: Microstrategy    movingsum    SQL    use

This site uses Akismet to reduce spam. Learn how your comment data is processed.